If you are to buy a vacuum robot or any home appliance for that matter, you would want it to be worth buying or else your money will go to waste. Vacuum robots are very helpful in maintaining the cleanliness of your homes even with minimal supervision. And speaking of vacuum robots, the iRobot Roomba line is among the best in the market.

The Roomba E5 and Roomba 960 are alike, however, the 960 uses an upgraded technology and has more smart features than the E5. Meanwhile, the Roomba E5 is a very reliable robot too but it is not up to par with the 960’s high-tech features.

In this article, we will take a look at these two robots, the Roomba E5 and 960, and discuss their differences, similarities, and specifications by taking a look at their cost, features, usability, cleaning performance, and design.

The Differences between Roomba E5 and 960

The Similarities between Roomba E5 and 960

The table below provides the specifications for the Roomba E5 and 960:

Comparing the iRobot Roomba E5 and 960 in Detail

When it comes to design, any iRobot Roomba vacuum robots feature a round and black body. They all look sturdy and solid laced with a very minimalist, sleek top surface. The Roomba E5 and 960 do not have any fancy decorations. They look very simple with their control panels placed in the center of the device.

Both the E5 and the 960 have three control buttons: CLEAN, Dock, and Spot. They also have a ring bumper, a handle, and indicator lights that will blink when the dust bin is full and when the battery is low. Underneath these robots are a pair of wheels and a bunch of sensors. In addition to that, the 960 has a built-in camera for navigation. It is located in the middle, a little below the control panel.

The Roomba 960 is more superior than the E5 when it comes to smart features and technology. However, the E5 and the 960 have a lot of similarities. They both use Dual Multi-Surface Brushes to pick up dust, dirt, and large debris; Edge-Sweeping Brush to remove the debris away from edges and corners; and vacuum suction to lift deep-seated dirt. The vacuum robots use the brushes and vacuum suction for their premium 3-Stage Cleaning System. They have the same cleaning system, but the 960 is better since its vacuum suction has 5x more power than the previous generation which makes it better at sucking deep-seated dirt.

To remove dust and dirt that are invisible to the naked eye, the Roomba E5 and 960 use HEPA (High-Efficiency Particulate Air) Type Filter that captures 99% of allergens and small dust particles, as small as 10 microns. All the dirt goes into the robot’s dust bin. The E5 and the 960 both have a 600 ml dust washable dust bin. Both of them can also clean all types of flooring from carpets to hardwood floors.

While the E5 is a very capable device, however, it does not change the fact that the 960 is better equipped with smarter technologies. Both of these vacuum robots use iAdapt technology for navigation, but since the 960 has a built-in camera, it uses a second-generation iAdapt 2.0 technology with vSLAM Navigation. They are equipped with Dirt Detection Technology that allows them to detect heavily soiled areas. The device will then clean the area by going through it back and forth until it is thoroughly clean. The 960 also uses the second generation Dirt Detection Technology.

These vacuum robots recognize the Virtual Wall Barrier, a technology that creates an invisible barrier the device can’t cross. You can use this kind of technology for containment. You also do not have to worry about the E5 and the 960 falling down the stairs or bumping into a wall because the iAdapt technology uses several bumps and cliff sensors that would prevent the device from bumping into fragile and delicate objects as well as fall down the stairs. Aside from that, the E5 and the 960 can also recognize electrical wire and cords as well as tassels because of its Anti-Tangle Technology.

The Roomba E5 has a larger lithium-ion battery than the 960 therefore it can operate for a much longer time. The E5 can run up to 90 minutes per charge while the 960 only has a running time of 60 minutes tops. Both of these robots automatically docks and recharges when their battery is low, however, only the 960 can resume cleaning and pick up from where it left off.

The Roomba E5 and 960 have very different navigation. The 960 uses a more advanced iAdapt 2.0 technology with vSLAM Navigation along with a built-in camera. While the E5 does not offer this feature. Because of that, the 960 can move methodically and in straight lines as it cleans while the E5 cleans the room using a pseudo-random pattern.

The 960 is considered as an expensive Roomba vacuum robot but it is not equipped with Imprint Smart Mapping Technology, a technology that allows the device to remember the layout of your home.

The E5 and the 960 are both vacuum robots that can be connected to your home network. They are WiFi-enabled and can be linked to Amazon Alexa and Google Assistant which will then allow you to voice control these robots – a big help since they do not have remote controls.

Q. Will the filters on the Roomba E5 and 960 help me with my allergies?

A. Yes, the Roomba E5 and the 960 are equipped with HEPA type filters that reduce in-home allergens.

Q. Which Roomba is better for pet hair?

A. Both the E5 and the 960 have impressive cleaning performances, however, when it comes to pet hair, I would say the 960 is better just because its vacuum suction is 5x more powerful than the E5’s vacuum suction.

Q. How is the battery life?

A. Both the E5 and the 960 use a lithium ion battery but the E5’s battery is larger therefore it has a longer running time compared to the 960. The E5 can run up to 90 minutes per charge while the 960 can only run for up to 60 minutes per charge.

Q. Are they WiFi-enabled?

A. Yes, both the Roomba E5 and 960 supports WiFi and can connect to your home network.

Q. How’s the navigation system for these robot vacuums?

A. The navigation system of the Roomba E5 and 960 are very good but the 960 has a better navigation system since it uses a navigation camera. The iAdapt Technology of these robots is equipped with cliff and bump sensors so you do not have to worry about the device falling down the stairs or bumping into a wall.

Q. Will the navigation stop working if a cat sits on it?

A. The E5 will still run even with a cat on top, as long as the cat is not that heavy. While the 960 will stop working because it has a camera on top. The camera serves as a navigation guide for the 960.

Q. Can I schedule cleaning sessions in specific rooms?

A. No, the Roomba E5 and the 960 are not that smart. These robots will start cleaning wherever they are.

Q. Does it have a remote control?

A. No. Unfortunately, both the Roomba E5 and 960 do not come with a remote control, however, you can turn your smartphone and or tablet into a remote control by downloading the iRobot Home App.

Q. Do I need to purchase the charger dock separately?

A. No, the Roomba E5 and 960 both have charging docks included in the box.

Q. Can these vacuum robots clean a thick carpet?

A. Yes, the E5 and the 960 both have vacuum suctions but the 960 will do the job better than the E5 because it’s vacuum suction has 5x more air power. 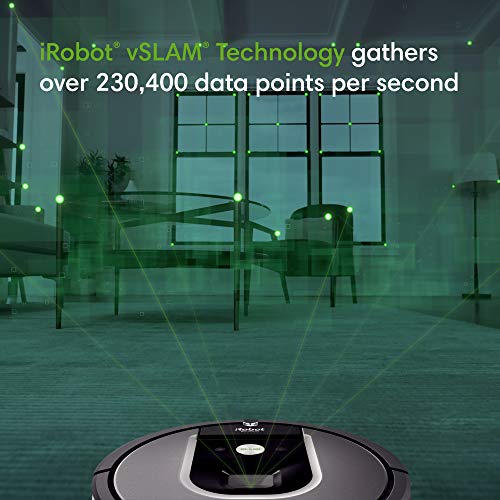 The iRobot Roomba E5 and 960 are very reliable vacuum robots. They both have a sturdy build and sleek design. They also offer smart features and use advanced technology that other vacuum robots do not have. Both of them can also be controlled through your smartphone or tablet via the iRobot Home App and can recognize voice commands via Amazon Alexa and Google Assistant.

The extra features of the 960 come with a price. It is more expensive than the E5. The E5 has its fair share of smart features and you can get it without breaking the bank, perfect for people who don’t want to spend a lot of money for a vacuum robot. The Roomba E5 also has a longer battery life than the 960, but of course, the 960 has a better cleaning performance which makes up for its short battery life. With intelligent navigation, the 960 is better for large houses. It also resumes cleaning after charging, a great feature to have if you have multiple rooms in your house.

In terms of cleaning performance and technologies used, the Roomba 960 is clearly the winner. It has smart features that are very useful. The thing is it’s expensive but if you are okay with its price, the 960 is a very good machine and is totally worth investing.