The iRobot Roomba 890 and 960 are just two of the brand’s wide range of vacuum robots. These two are both round and black however the Roomba 890 has a touch of brown while the 960 has silver. In terms of performance, the 960 is smarter compared to the 860. There is also a slight difference when it comes to their price tags, the Roomba 960 being more expensive than the 890. Other than that, the Roomba 890 and 960 have very similar functions and features.

If you are planning to get either of these vacuum robots you are in the right place. We will break down the differences, similarities, and specifications of the Roomba 890 and 960. We will put them side-by-side to help you decide which vacuum robot is the best for you.

The Differences between Roomba 890 and 960

The Similarities between Roomba 890 and 960 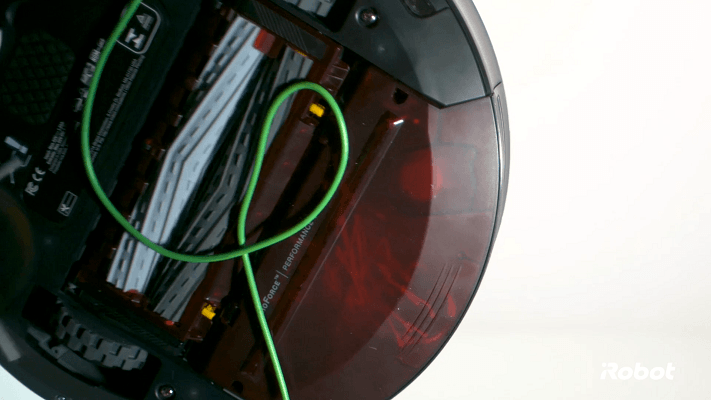 The table below provides the specifications for the Roomba 890 and 960:

Comparing the iRobot Roomba 890 and 960 in Detail 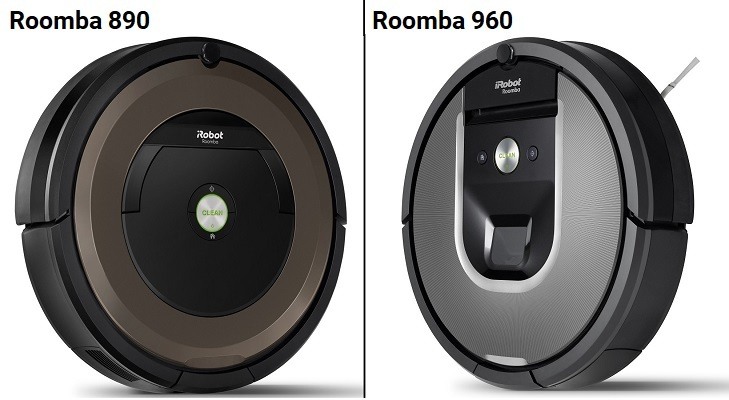 The very first thing that you would notice is the difference between the design. Although they are very similar in terms of size and dimension, the Roomba 890 and Roomba 960 have different colors. The 890 has a black body with a touch of brown while the 960 has a touch of silver. The placement of the control buttons are also different. The 890 has its control buttons at the center of the device. It has three buttons in total: Clean, Spot, and Dock. Meanwhile, the 960 has a navigation camera so the control panel is located on the upper middle part of the device.  It also has the same buttons as the 890.

The two vacuum robots are both 3.6 inches tall. The 960 weighs 8.6 lbs, a little heavier than the 890’s 8.4 lbs. They also have a bumper ring, a handle, and full bin indicators. Underneath them you will find their wheels, the brushes, and the sensors.

In this category, you will see how different the 890 and the 960 are. Both have a 3-stage cleaning system and uses the same Dual Multi-Surface Brushes that pick up dust, dirt, and large debris; Edge-Sweeping Brush that removes the debris away from edges and corners; and a Power Lifting Suction that has five times more air power than their predecessors.

The Roomba 890 and 960 have the same HEPA (High Efficiency Particulate Air) Type Filter that captures 99% of allergens and small dust particles, as small as 10 microns, which makes it ideal for homes with pets. Both the 890 and 960 also use an AeroForce Bin, a high-capacity sealed bin that can hold up to 60% more dirt. They also have the same dust bin capacity at 600 ml.

You do not have to worry about these devices falling down the stairs or bumping into walls because they are equipped with cliff and bump sensors that prevent such things from happening. They also have a Virtual Wall Barrier, a technology that creates an invisible barrier the device can’t cross, making it easier for you to confine the vacuum robot to a particular area in the house and it also prevents the device from getting too close on fragile and delicate objects. Both also have Anti-Tangle sensors that recognize electrical wires, cords, and tassels.

However, the 960 is smarter as it uses more advanced technologies than the 860. The Roomba 960 is capable of entire level cleaning while the 890 can’t. It is also equipped with upgraded Dirt Detection technology and iAdapt 2.0 technology with vSLAM Navigation. And is equipped with a built-in camera for navigation. The Roomba 960 is also smart enough to map its surroundings to effectively clean an entire level of your home, around objects, and even under furniture. It also uses a technology called the Imprint Link Technology which allows the Roomba 960 and Braava Jet M6 Robot to work together for more effective cleaning.

The Roomba 890, on the other hand, is also fitted with Dirt Detection technology that allows the device to detect dirty areas and clean that area completely and iAdapt technology for navigation. But it does not have the Imprint Link Technology and is not capable of mapping its surroundings because it does not have a navigation camera.

The Roomba 960 has better battery life compared to the 890. They both use the same lithium ion batteries but the 960 can run up to 75 minutes while the 890 has a running time of up to 60 minutes. If you think about it, a 15-minute difference is not that impressive but of course if the device is going to clean a much larger area then the 15-minute difference is useful as it could still do a lot of cleaning. Their battery power is not that impressive to be honest because cheaper Roomba units can run up to 90 minutes.

When the battery is low, both the 960 and the 890 automatically dock and recharge. It takes 2 to 3 hours before they get fully charged. After charging, the 960 resumes cleaning where it left off after reaching for charging, a feature that the 890 does not offer.

Although the navigation of the 890 is pretty decent, the Roomba 960 has better navigation. Both of them do not have Imprint Smart Mapping Technology, a technology that allows the device to remember the layout of your home, unlike the more expensive Roomba units but the Roomba 960 has a built-in camera to map the house. It cleans the house methodically and in straight lines while the 890 uses the same random navigation the cheaper Roomba units have which means it randomly moves around the area as it cleans. 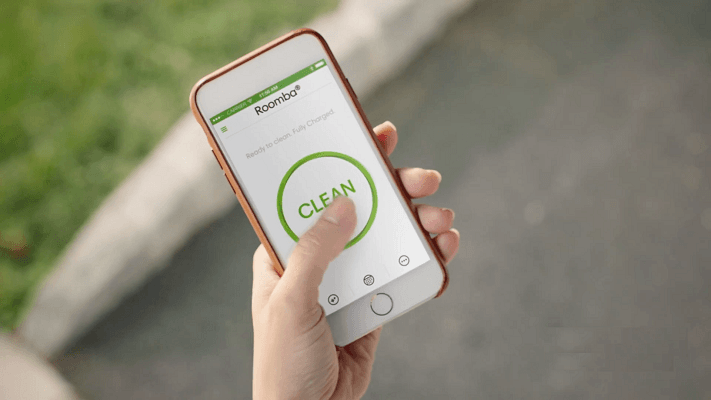 Both the Roomba 890 and 960 are capable of connecting to WiFi which gives you a more hands-free control over them and allows you to control the device without physically reaching for it. With that, the Roomba 890 and Roomba 960 are both compatible with Amazon Alexa and Google Assistant which means they will recognize voice commands through these channels. Aside from smart home integration, the Roomba 890 and Roomba 960 can be linked to the iRobot Home App, an app that you can download on your smartphone and tablet that acts as a remote control. The iRobot Home App allows you to monitor and schedule cleaning sessions and you will also receive reports from the devices. You can also check the battery life and other information about the 890 and 960 through the app.

Q. How do they navigate around the house?

A. The Roomba 890 has a random navigation which means it randomly moves around the room as it cleans. Meanwhile, the 960 uses a camera for navigation and follows a straight line route as it cleans.

Q. Do they tangle up with cords?

A. No, the Roomba 890 and 960 have Anti-Tangle sensors that recognize cords, wires, and tassels.

Q. Do I have to purchase the docking station separately?

Q. Does it have WiFi?

A. Yes, the Roomba 890 supports wireless connectivity and is WiFi-enabled.

Q. How long is the battery life of these vacuum robots?

A. The Roomba 890 has up to 60 minutes running time per charge while the Roomba 960 can run up to 75 minutes per charge.

Q. Will it scratch the floor?

A. No, the Roomba 890 and 960 have brushes underneath and will not scratch your floors.

Q. Will they be able to avoid the stairs?

A. Yes, the Roomba 890 and 960 have cliff and bump sensors so they won’t fall off the stairs nor bump into a wall.

Q. Does it have a remote control?

A. No. Unfortunately, the Roomba 890 and 960 do not come with a remote control nor you can purchase one for that matter, however, your smartphones and or tablets can act like a remote control once you download the iRobot Home App. The app will allow you to monitor and schedule cleaning sessions and it sends you reports directly from the vacuum robot. You can also see all the details regarding the battery life or the dust bin capacity of the vacuum robots.

Q. What will happen if an object gets stuck in the vacuum?

A. The Roomba 890 and 960 will automatically go into error mode and will shut down until the object is removed. You will also be notified about the alert through the iRobot Home App.

Q. Does it come with a Virtual Wall Barrier?

The Roomba 890 and 960 are both very good investments. They help you maintain your floors clean plus with vacuum robots, you can multitask. These vacuum robots are very capable. They are equipped with advanced technologies and their cleaning performance is impressive. They can clean any type of floors–hardwood, tile, linoleum, and carpet.

The features of these two devices are very similar but there are things too that set them apart. Like the 960 is capable of entire level cleaning while the 890 is not built to do that kind of task. The 960 also uses a camera for navigation and it has a longer battery life. It also automatically resumes cleaning after charging while the 890 does not have those features and its battery life is 15-minute short compared to the 960. 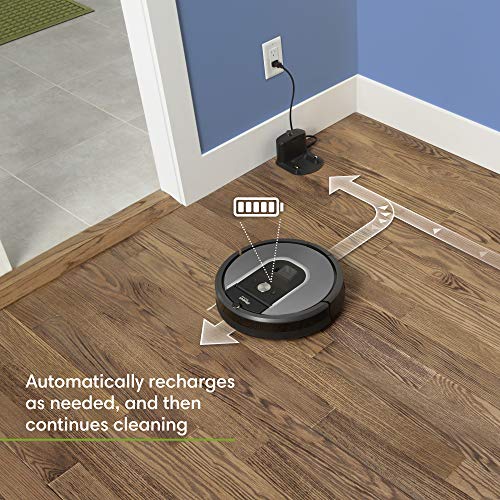 The Roomba 960 clearly wins. It has a lot of useful smart features that the 890 does not have. However, even though the 890 is not that advanced, it is still a powerful vacuum robot and it is just as impressive as the 960. Picking which Roomba to get depends on your budget and your needs. If you are on a tight budget or you have a smaller home, the Roomba 890 is perfect for you. Its cleaning performance is great and it is cheaper than the 960. On the other hand, if you have extra money and want to get the extra perks, we suggest you get the 960.